Driving towards Manchester Mum commented that we would be going around the ‘dark satanic mills’ and I immediately started singing Jerusalem (Blake’s poem set to music by Sir Hubert Parry). I learned it at school and have always been fond of it for no reason I can say. As I came to the final line a wave of grief rose up and I found myself in tears.

I spoke the grief aloud, wondering where on Earth it was coming from, and Mum said it makes sense. Although Jerusalem is used as a patriotic chest beater, at its heart it is a protest poem, an exhortation to the people of England to make their country the promised land. Blake was deeply concerned about industrialisation, particularly its impact on children. 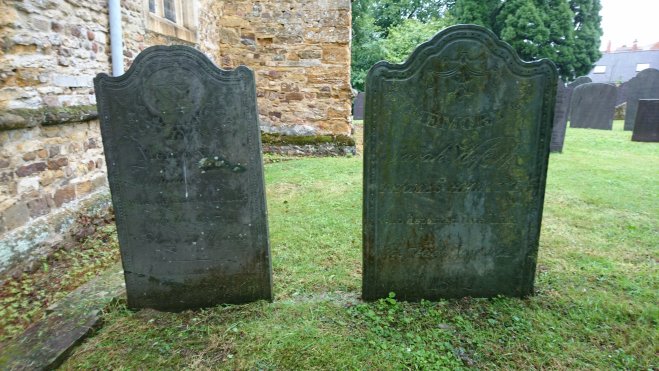 Grave of two of my Hewitt ancestors in Welford, Northamptonshire.

It suddenly struck me that this is the choice my ancestors had to make. Most of them were farm labourers who did not own land of their own. As machinery began to take over the need for manual labourers, as the population grew and since the commons had been enclosed, they had no way to make a living. They would have been choosing between immigration and moving to the city to work in factories.

In Scotland we had a few hours to kill before catching the ferry and went looking for old growth forest. I came across Galloway Forest Park, heralded as a tourist destination with many walking tracks, and right on our way. When we started driving through the park though I was dismayed to find it mostly plantation timber interspersed with logged coupes.

It is such a culture shock, the notion of a ‘national park’ as we understand it in Australia seems to be nonexistent here. I asked a man where there was forest that was not logged and he completely misunderstood the question “Oh you were unlucky if you came across a place where they were logging,” he said “they usually put up signs to make it safe, you needn’t worry about it.” We were having this conversation at a lookout with a view over a stunning loch, the hill opposite was half plantation timber and half logged, people were wandering along and taking pictures as though this were completely normal.

A woman at the visitors centre pointed us toward a section of old oak forest. It was beautiful and I was grateful to experience it but it wasn’t old by Australian standards, it was not a full and flourishing ecosystem. The notion that forest needs to be ‘managed’ seems to be common here, that forests need to ‘work,’ to be cut down for human purposes and regrown. Even the forests designated ‘Ancient Woodland‘ are still ‘managed’ in this way.

It explains a lot about how the early settlers responded to the land when they colonised Australia (not to mention forestry departments to this day). In many parts of the country a condition of being allowed to own land was that the landholder cut down every tree. In addition teams of men roamed the countryside looking for the tallest or biggest trees to cut down for the glory of it. I feel sick to think of it.

I am sure there are many folks in Scotland, England and Ireland that do not hold such utilitarian views toward the land, I am very much a casual observer and maybe I am just unlucky. I know for a fact that there are tree lovers here and I can only wonder how they survive because I am completely overwhelmed by grief. Being here makes me want to become a full time forest activist, to stop even one more precious old tree from being cut down.

Both these experiences are making me think about colonisation, about where colonisation comes from and how it operates. It has been doing my head in. I knew that it was going to come up but I had no idea how overwhelming it would feel, my search for healing seems naive. I want to live in Australia and I want to take responsibility for my settler colonial ancestry and I want to be in right relationship with the traditional custodians of the land on which I live. There is no template for this, there is no map, I don’t even know if it’s possible and the grief… I don’t know how to be with it.