Since I left the workforce three weeks ago and returned from our sojourn in Daylesford, I have been taking time each day to sit in a park near my home and watch the birds.

I was inspired to start doing this by my girlfriend, Mel, who has been saying for months that she wants to find a sit spot and start a daily practice. Leaving work has allowed me sink into a different way of being where things like rising early to sit in a park seem like a perfectly sensible way to start the day.

Even in these short weeks I am astounded at how much I have learned just by looking and being aware. I love birds, I am in the habit of paying attention to them, I know the names of most of the common birds in my neighbourhood but there is so much I was missing.

One of my early ‘discoveries’ was a particular bird song that I admired. I initially thought this song belonged to the noisy mynah. I was hearing the call all over the place so I figured it must be a very common bird. I caught a glimpse of a grey bird flying out of the place where I’d heard the sound a moment earlier. I was pretty certain but I kept my eyes open for confirmation.

The next day I had an encounter with a butcher bird, I was pleased to see it because I had thought butcher birds were rare in the suburbs outside large regeneration areas. It sat in a small tree just near my sit spot. As I watched it lifted its beak and song rang out, the same song I had erroneously attributed to the noisy mynah.

This encounter shocked me. Not only did I discover that butcher birds possess a beautiful, melodic call but that far from being rare they are all over the place. There are a pair of butcher birds nesting near my sit spot so I have had the pleasure of observing them almost daily.

It worries me that I have failed to notice their entire species all this time. I suspect it is because there are a handful of birds that are known to me such as rosellas, magpies, magpie larks, mynahs, wattyl birds, ravens, or lorikeets. Viewed from below the butcher bird’s grey breast resembles a mynah, from above its black and white back resembles a magpie lark. I can only assume that I have been seeing what I expected to see rather than noticing the specifics of what is there.

What a wonderful lesson in humility.

In October Mel and I are travelling to northern NSW to learn from nature awareness mentor, Jon Young. One of the workshops is about bird language, understanding the pattern of bird interactions and calls as a gateway into understanding what’s going on in the more-than-human world around us. I can’t wait to learn some frameworks to deepen my understanding of what my local birds are saying to each other.

We are running a crowdfunding campaign to help us get up there and share what we learn afterwards, we’d love to have you join us – http://startsomegood.com/urbannatureawareness

It’s been a number of months since I completed the Space Between Stories online course with Charles Eisenstein. At the time I was mildly disappointed, I wanted to change direction and I thought the course would do that or at least point the way. Instead it pretty much confirmed the holding pattern I was already in. The various speakers seemed to suggest that the right moment would present itself without my control.

At the time this was frustrating, I went to a three day retreat in the middle and was bouyed up by the beautiful community of deep ecologists and spiritual Earth seekers, which only compounded my dissatisfaction with my ‘ordinary’ life and with the artifice of the Space Between Stories online community. Now though I have to acknowledge those speakers were right.

Three weeks ago I resigned from my very secure, reasonably well-paid bureaucratic position in a government institution. The work I did there was good work, the people I worked with were lovely and all had their hearts in the right place. There were opportunities for me to learn and grow and make a difference in the world but it was prey to the usual frustrations of working in strict hierarchies. I’ve known for some time that I needed to leave but I wasn’t sure of my next step and then, after a particularly difficult week, the answer was startlingly clear. I just had to quit.

I did it with grace, ruffling as few feathers as possible but it got to the point where I just knew I couldn’t work there anymore and so I resigned without knowing what the ‘next step’ would be.

Over the past three weeks a number of ‘next steps’ have presented themselves to me. Things that I never even thought possible have been offered. What is even more surprising is that each week my ideas about what I want to do in life and my vision for the future have changed and deepened. Things that I thought I wanted have been rejected in favour of more radical paths, paths that I hadn’t even been aware of until I gave myself permission to dream larger, until I chose to step out of the structures that were keeping me secure.

I am taking this opportunity to experiment with following my heart. I don’t know what the future will look like but I know that the Earth will be at the centre of my life. I want to prioritise my relationship with the more-than-human and see where it leads. I look forward to sharing the journey with you!

Last Saturday I had the great privilege of listening to authors, Maya Ward (The Comfort of Water) and Claire Dunn (My year without matches) in conversation with Sean O’Caroll (founder of Wild Mind) at CERES. It was held on the Village Green, right by Merri Creek, the perfect location for a discussion of rewilding in urban contexts.

Sean took a moment at the start to invite us all to listen to the more than human world around us and bring that richness into our awareness. Throughout the evening Maya and Claire’s reflections were punctuated by the call of ducks, wattlebirds and crows. It was delicious to open my senses to all of these things and include them in my experience of the conversation.

What struck me most about the conversation was the way that it traversed personal, spiritual and political worlds. So many levels of the human story are highlighted by the journey of these women. Their choices have made them different from other people but the fears and personal confrontations they describe are universal. By choosing to engage with the world in new ways, they challenge the status quo and open space for all of us to privilege new/old forms of knowing and ways of being that are based in direct experience of the more than human.

To close they taught us wide angle vision and fox walking. I have been using wide angled vision throughout the week – on the train, in crowded city streets, on my walk to work through the park. It’s a difficult experience to describe but there’s definitely something to it, a kind of clarity and presence outside my usual perception.

Over all the evening was very enjoyable but it barely scratched the surface of what it might take to rewild ourselves in urban environments. Hopefully this will be the first of many such conversations. There were over 250 RSVPs on Facebook (about 60 showed up on the day and it was a chilly evening). It demonstrates to me that there is a great hunger for conversation about living closer to wildness in our cities. I’m excited that so many share my passion.

Sunday was a big day of protests against our government’s woeful response to climate change. They are actually planning to dismantle measures put in place by the previous government. The loss of the carbon price seems inevitable and yet 60,000 people across the country turned out to protest their intention to repeal it.

I showed my support by participating in a Yatra in Sherbrooke forest above Belgrave. We walked about 7km (the Grants picnic ground loop if you know the area) in silence interspersed with readings and deep ecology exercises from Joanna Macy. 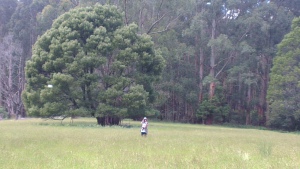 It was a lovely way to do deep ecology, dwarfed by the mountain ash forest and held by it as we walked in silent solidarity.  I was so quickly embraced by the little group although I’d only just met most of them.  I guess you don’t show up for something like that unless you have a particular spiritual bent and it’s a pretty deep place to start from.

It’s reassuring to see the diversity of people who are engaged with deep ecology.  I look forward to the day when Yatras become like 5rhythms and you can be sure there’s one happening somewhere every weekend. We’re building what we need to sustain ourselves not just in environmental activism but in life.

Yesterday I made it out into the bush. It was awesome, the smell, the sounds, the largeness of it all.

It caused me to reflect on the limitations of ‘connecting with nature’ in urban environments. When you are in the bush you are overwhelmed by the non-human, you don’t have to look for it, you don’t have to try, it’s just there. END_OF_DOCUMENT_TOKEN_TO_BE_REPLACED

The rewild your life challenge got off to a good start but illness kept me indoors through the middle of the week. My ‘half hour in nature’ involved lying in a hammock staring at the tree in our front yard, to be fair the tree in question is magnificent and is home to a pair of red wattlebirds. END_OF_DOCUMENT_TOKEN_TO_BE_REPLACED 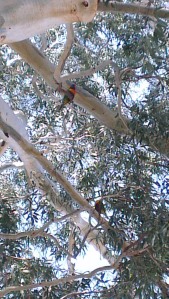 A bunch of people in North America have started a website called We are wildness and they are running a 30 day ‘rewild your life’ challenge. All you have to do is spend half an hour in nature each day in September sans technology except taking photos. END_OF_DOCUMENT_TOKEN_TO_BE_REPLACED