We are on the ferry to Rathlin in Northern Ireland. The locals say it quickly and enunciate the ‘L’ so it sounds like rattlin’. Mum is telling me a story of my ancestors – Catherine McCaig was born on the island in 1821, she married Harry Begley and moved to Port Stuart, they had a daughter, Annie (my Grandma Bear’s grandmother) and several other children.

END_OF_DOCUMENT_TOKEN_TO_BE_REPLACED

Driving towards Manchester Mum commented that we would be going around the ‘dark satanic mills’ and I immediately started singing Jerusalem (Blake’s poem set to music by Sir Hubert Parry). I learned it at school and have always been fond of it for no reason I can say. As I came to the final line a wave of grief rose up and I found myself in tears.

END_OF_DOCUMENT_TOKEN_TO_BE_REPLACED

I am a fifth generation Australian settler and I am in the UK, in the lands of my ancestors, on a quest of healing.

It is a quest in the sense that the outcome is unknown to me. I do not know what, if anything, I will discover while I am here.

END_OF_DOCUMENT_TOKEN_TO_BE_REPLACED

Poetrees is alive! You can go to poetrees.net.au right now and read poems that people have submitted, you can visit their treasured trees and you can even add a poem and a tree of your own.

So now it’s your turn to become part of the Poetrees story. Sit by your favorite tree and write a poem. Know that we are listening gently, ready to hear the feeling behind your clumsy words. Tell us what you love about it. Tell us what your tree loves.

If your muse has deserted you and the words are stalling on your tongue, never fear! Here are a bunch of other ways to support the project:

2. Tell us what you think. It’s tough sending a brand new baby out into the world, words of encouragement or feedback about how the site is working are very welcome!

3. Encourage other poets. Share the poems that are already up on the site with #poetrees, let them know how much you appreciate their work and show support for the courageous early adopters.

4. If you are in Melbourne, Australia come to a Poetrees workshop:

Poetrees is supported by the City of Melbourne 2016 Arts Grants Program.

Poetrees was created on the lands of the Wurundjeri people of the Kulin nation. We pay our respects to their elders past, present and future and to all people around the world who care for country.

The Poetrees seed has been lurking in the dark for over three months. We’ve been gently watering it with encouraging words, fertilizing it with our creative insights and learning from our mistakes. Over the past week a small tendril has been reaching for the sun as we test the prototype and make sure it’s all ready for your poetic words of tree love.

For those who are new to the project, Poetrees is a playful community arts offering that explores our connection with trees. Users will be able to submit a poem and a tree to the interactive map on our website so that others can visit the tree and read the poem.

I’m excited to let you know that after hours and hours of hard work from the team, the Poetrees website is almost ready to burst into the daylight!

We’ve done everything we can to make a joyful container for your tree-loving words. Next week it will be your turn to step out of the shade and share your poetree with the world.

We’re not leaving you out on a limb though! The important task of composing poems needn’t be carried out alone. We have prepared a series of poem seeding workshops throughout the Sustainable Living Festival to help you tend to your creative garden. 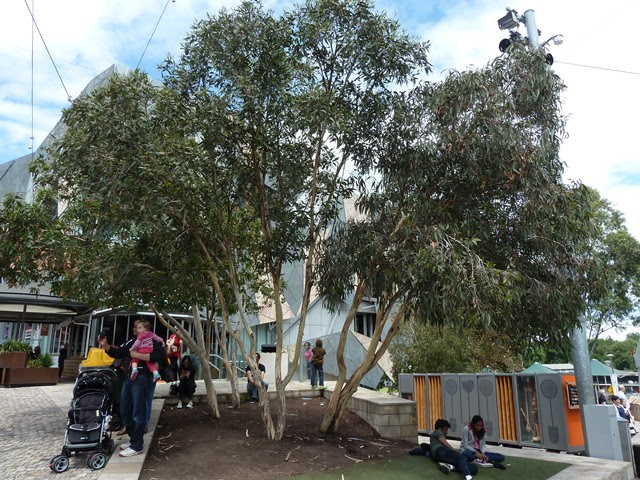 The one hour workshops will comprise a tree meditation and some simple writing exercises to help the creative sap rise through your limbs, onto the page and up to the electronic mycelial network (aka the internet).

Come to one or come to all three! Commune with trees and write poetry! Invite your friends and family, spread the tree love across our city. #inmelbcity #SLFAus #poetrees

We made some new friends! The week after I finished up at work we travelled to Daylesford to ‘SWAP’ (Social Warming Artists and Permaculturalists) with Artist as Family. I can’t think of a better way to begin this new phase of my life. It was divine, too many thoughts and ideas and inspirations to share but this little poem captures some of the spirit. END_OF_DOCUMENT_TOKEN_TO_BE_REPLACED

It’s been a number of months since I completed the Space Between Stories online course with Charles Eisenstein. At the time I was mildly disappointed, I wanted to change direction and I thought the course would do that or at least point the way. Instead it pretty much confirmed the holding pattern I was already in. The various speakers seemed to suggest that the right moment would present itself without my control.

At the time this was frustrating, I went to a three day retreat in the middle and was bouyed up by the beautiful community of deep ecologists and spiritual Earth seekers, which only compounded my dissatisfaction with my ‘ordinary’ life and with the artifice of the Space Between Stories online community. Now though I have to acknowledge those speakers were right.

Three weeks ago I resigned from my very secure, reasonably well-paid bureaucratic position in a government institution. The work I did there was good work, the people I worked with were lovely and all had their hearts in the right place. There were opportunities for me to learn and grow and make a difference in the world but it was prey to the usual frustrations of working in strict hierarchies. I’ve known for some time that I needed to leave but I wasn’t sure of my next step and then, after a particularly difficult week, the answer was startlingly clear. I just had to quit.

I did it with grace, ruffling as few feathers as possible but it got to the point where I just knew I couldn’t work there anymore and so I resigned without knowing what the ‘next step’ would be.

Over the past three weeks a number of ‘next steps’ have presented themselves to me. Things that I never even thought possible have been offered. What is even more surprising is that each week my ideas about what I want to do in life and my vision for the future have changed and deepened. Things that I thought I wanted have been rejected in favour of more radical paths, paths that I hadn’t even been aware of until I gave myself permission to dream larger, until I chose to step out of the structures that were keeping me secure.

I am taking this opportunity to experiment with following my heart. I don’t know what the future will look like but I know that the Earth will be at the centre of my life. I want to prioritise my relationship with the more-than-human and see where it leads. I look forward to sharing the journey with you!

There’s a creek, buried beneath
These houses and these asphalt streets.
There’s a spark within my heart
That waits and weeps for sweet release.

There are weeds, that meet our needs
Amongst these urban forest leaves.
There are trees of ancient lineage
That whisper truth to those who’ll hear.

There’s a soul within this land
That can’t be grasped by human hands.
I have eyes and heart to see
The nature round and within me.

I haven’t ever associated it with anything tangible though. I don’t live close enough to the Earth, don’t spend enough time observing the more than human to notice any incremental changes. I’ve noticed no plants or insects or animals growing in new places or behaving strangely. Until now.

I can’t remember who first mentioned the wasps. I think my ex-wife told me they had to move our son’s birthday party indoors to avoid them.

At a cafe a week later I noticed them swarming over someone’s bacon. The waiter told the customers that he’d complained to council but there’s nothing they can do. Wasps can smell food over a kilometre away and it is almost impossible to track them back to their nest.

On a bushwalk in Daylesford last weekend I was struck by their ever-present hum. There were so many hovering around the mainstreet I had to keep the windows closed when I drove past.

My son told me that his kinder friend’s mother had been bitten on the lip while eating bacon and his friend had been stung too. It is a fear that looms large in his small world and is no doubt shared by his friends and their parents.

Via these small moments the wasps entered my field of vision. Then I saw this article on my newsfeed. It turns out the whole of Melbourne has a wasp problem. My attention was captured by one line in particular from the entomologist:

And so it begins.

The wasps are harbingers. Their presence fills me with dread but it’s not the sting that worries me, it’s the myriad unknown changes to come.

On the face of it the Forum process is deceptively simple. A group of people sit in a circle and silently offer their presence to one another as they take it in turns to step into the middle and speak about what is going on for them. A facilitator sometimes asks questions of the person in the middle or offers various techniques to encourage them to go deeper into what they are feeling. When each person finishes their time in the centre, the silent witnesses are invited to become mirrors and offer reflections. They speak in third person about what the protagonist shared, what they noticed or what resonated with them.