After the success of our crowdfunding campaign my partner and I headed up to norther NSW to learn bird language and nature awareness with American tracker, Jon Young. 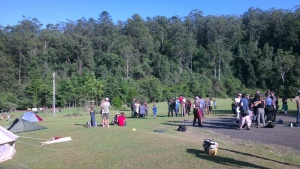 My first day of learning bird language was difficult and confusing. We were sent out to find sit spots with a simple instruction to observe tension vs relaxation in the birds around us. It seems easy enough but the diversity of Australian song birds, the high activity of spring and the amount of territorial aggression made it extremely difficult to weed through the complexity to make any sense of the whole.

The debrief with my small group felt long and tedious, the blind leading the blind, it was hard to know what to share or what to listen for. At the end of that first session though I felt like I was beginning to get a sense of what is ‘baseline’ behaviour as opposed to alert or alarmed. It seems that in the Australian landscape it is silence that speaks loudest! The bush is rarely quiet unless there is some kind of predator nearby. 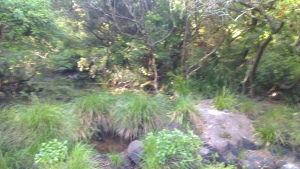 Jon was very clear that Australia is an unfamiliar landscape for him. He didn’t try to teach us about the specificities of the local flora and fauna, instead he taught us a process for engaging with the more-than-human and generating our own connections and understandings. In fact, I observed that he rarely asserted his own knowledge at all, preferring to tell stories that left us to join our own dots.

What we did learn though, after we had started making our own observations, was patterns for how birds communicate and what they might be saying. These patterns are not based on the specifics of bird evolution or biology but where birds tend to fit within an ecosystem. For example Australian birds will go silent when there is an aerial predator on the wing, just like birds in other countries.

I am already putting some of the processes we learned into practice. In my morning sit-spot (at Highfield Park) a pair of magpies landed 15 metres away and looked me over. Rather than staring at them like I usually do, I avoided eye contact and tipped my head away from them. The magpies walked closer, eventually crossing my gaze a mere 2 metres in front of where I was sitting. Having been a dog owner I am familiar with using body language to communicate with animals but I had never thought to try it with birds.

I feel like I have taken the first steps on a long and exciting journey! My knowledge and my sense of connection will only continue to grow.