I haven’t written for a little while because I’ve been busy planning an adventure. Ruth over at Inscendence put out a call for women to join a wild nature retreat and vision quest and, since I was looking to justify a trip to Portland a week later for World Domination Summit, I said ‘I’m in.’ I was hoping to make the Back Creek Project happen as soon as I get back but that doesn’t feel very sensible now. I’ve had some good discussions with a few people at council, the local friends group and the Wurundjeri Council but I think it’s worth letting it gestate a little.

In the meantime here are some photos from a bit of reconnaisance I did with a friend of the Denman St portion of the creek: 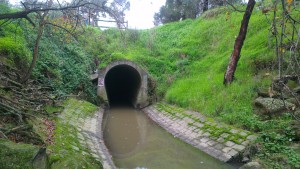 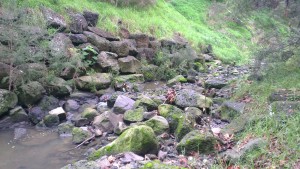 I’ve also been thinking about some of the ideas that precipitated this project, apart from Maya’s beautiful book and wanted to share some with you.

Firstly the Wurundjeri people of the Kulin nations, traditional owners of the land on which I live and work. I have participated in Indigenous history walks in the Botanical Gardens and along the Yarra (covered elsewhere also). Both taught me to see the living history beneath the concrete (as Tiddas so eloquently put it). This insight continues to shape the way I see and relate to the land I pass through every day and forms the backbone of a project like this.
When I was doing my Masters I came across Freya Mathews, her books Reinhabiting Reality and For love of matter challenged me to think differently about where I live. She set a powerful example of living locally and reinscribing urban environments with the sacred.
Dr Peter Cock of Moora Moora taught Social and Sacred Ecology at Monash University. I went on an overnight solo and my spirit animal was a leech. It seemed pretty mundane at the time but when I returned to the city it was wild to think that I had made a blood sacrifice to the bush.
My gratitude must also go to the Grandmother Gum, musk lorikeets, tawny frogmouth, magpies and ravens, ring tail possums, hardenbergia violacea, all these creatures taught me to open my heart, to love the more-than-human. The small, every day visitations that act as a gateway to the enormous reality of our interdependence.
Join 635 other followers